Minerals and metals are the building blocks of the computers and smartphones we rely on, of the vehicles and public transit that get us places, of the buildings where we live and work, and of green technologies that help make the world a more sustainable place.

Ores recovered by mining include metals, coal, oil shale, gemstones, limestone, dimension stone, rock salt, potash, gravel, and clay. Mining is required to obtain any material that cannot be grown through agricultural processes, or created artificially in a laboratory or factory. Mining in a wider sense includes extraction of any non-renewable resource such as petroleum, natural gas, or even water.

The 10 Most Commonly Mined Minerals and Their Uses

What is mineral mining?

Mineral mining is the extraction of valuable minerals or other geological materials from the earth from an orebody, lode, vein, seam, reef or placer deposits which forms the mineralized package of economic interest to the miner.

Geologists use many methods to find mineral deposits that will be profitable to mine. Ores that are close to the surface are mined by surface mining methods. Ores that are deep in Earth are mined using underground methods. Metal ores must be melted to make metals.

Mining techniques can be divided into two common excavation types: surface mining and sub-surface (underground) mining. Today, surface mining is much more common, and produces, for example, 85% of minerals (excluding petroleum and natural gas) in the United States, including 98% of metallic ores.

Some mining, including much of the rare earth elements and uranium mining, is done by less-common methods, such as in-situ leaching: this technique involves digging neither at the surface nor underground. The extraction of target minerals by this technique requires that they be soluble, e.g., potash, potassium chloride, sodium chloride, sodium sulfate, which dissolve in water. Some minerals, such as copper minerals and uranium oxide, require acid or carbonate solutions to dissolve.

Surface mining is done by removing (stripping) surface vegetation, dirt, and, if necessary, layers of bedrock in order to reach buried ore deposits. Techniques of surface mining include: open-pit mining, which is the recovery of materials from an open pit in the ground, quarrying, identical to open-pit mining except that it refers to sand, stone and clay;[32] strip mining, which consists of stripping surface layers off to reveal ore/seams underneath; and mountaintop removal, commonly associated with coal mining, which involves taking the top of a mountain off to reach ore deposits at depth. Most (but not all) placer deposits, because of their shallowly buried nature, are mined by surface methods. Finally, landfill mining involves sites where landfills are excavated and processed.

Other methods include shrinkage stope mining, which is mining upward, creating a sloping underground room, long wall mining, which is grinding a long ore surface underground, and room and pillar mining, which is removing ore from rooms while leaving pillars in place to support the roof of the room. Room and pillar mining often leads to retreat mining, in which supporting pillars are removed as miners retreat, allowing the room to cave in, thereby loosening more ore. Additional sub-surface mining methods include hard rock mining, which is mining of hard rock (igneous, metamorphic or sedimentary) materials, bore hole mining, drift and fill mining, long hole slope mining, sub level caving, and block caving.

Highwall mining is another form of surface mining that evolved from auger mining. In Highwall mining, the coal seam is penetrated by a continuous miner propelled by a hydraulic Pushbeam Transfer Mechanism (PTM). Highwall mining can produce thousands of tons of coal in contour-strip operations with narrow benches, previously mined areas, trench mine applications and steep-dip seams with controlled water-inflow pump system and/or a gas (inert) venting system.

Once the mineral is extracted, it is often then processed. The science of extractive metallurgy is a specialized area in the science of metallurgy that studies the extraction of valuable metals from their ores, especially through chemical or mechanical means.

Mineral processing (or mineral dressing) is a specialized area in the science of metallurgy that studies the mechanical means of crushing, grinding, and washing that enable the separation (extractive metallurgy) of valuable metals or minerals from their gangue (waste material). Processing of placer ore material consists of gravity-dependent methods of separation, such as sluice boxes. Only minor shaking or washing may be necessary to disaggregate (unclump) the sands or gravels before processing. Processing of ore from a lode mine, whether it is a surface or subsurface mine, requires that the rock ore be crushed and pulverized before extraction of the valuable minerals begins. After lode ore is crushed, recovery of the valuable minerals is done by one, or a combination of several, mechanical and chemical techniques.

Since most metals are present in ores as oxides or sulfides, the metal needs to be reduced to its metallic form. This can be accomplished through chemical means such as smelting or through electrolytic reduction, as in the case of aluminium. Geometallurgy combines the geologic sciences with extractive metallurgy and mining. 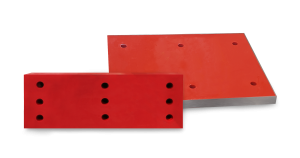 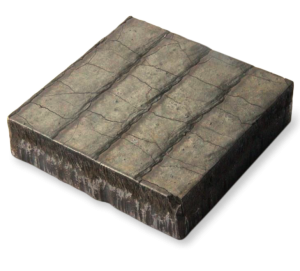 Objective: To solve major carry-back issues in a minimum of clearance space for clean up. Challenge: This sand and gravel plant was experiencing massive build-ups of carry back. The challenge was to be able to install a conveyor belt pre-cleaner… 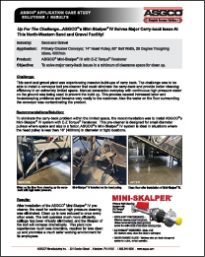 Objective: To solve major carry-back issues in a minimum of clearance space for clean up.

Challenge: This sand and gravel plant was experiencing massive build-ups of carry back.
The challenge was to be able to install a conveyor belt pre-cleaner that could eliminate the
carry-back and provide better cleaning efficiency in an extremely limited space. Manual
excavation everyday with continuous high pressure water on the ground was being used
to prevent the build up. This process caused increased labor and housekeeping problems
and became very costly to the customer. Also the water on the floor surrounding
the conveyor was contaminating the product.

Recommendations/Solution: To eliminate the carry-back problem within the limited space, the
recommendation was to install ASGCO®’s Mini-Skalper® IV system with E-Z Torque® Tensioner.
This pre-cleaner is designed for small diameter pulleys where space and size is a factor. ASGCO®’s
Mini-Skalper® IV system is ideal in situations where the head pulley is less then 16” (400mm)
in diameter or tight locations.

Results: After installation of the ASGCO® Mini-Skalper® IV pre-cleaner, the need for continuous high
pressure cleaning was eliminated. Clean up is now reduced to once every other week. The belt operates
much more efficiently, spillage has been virtually eliminated, and the lifespan of the belt will increase
dramatically. This plant now experiences much less downtime, requires far less clean up and promotes
a much safer working environment for its employees.

Objective: To prevent spillage at this transfer point and eliminate pulsation of the conveyor belt. Challenge: This customer has had reoccurring issues with this transfer due to spillage. (more…)

Objective: To prevent spillage at this transfer point and eliminate pulsation of the conveyor belt.

Challenge: This customer has had reoccurring issues with this transfer due to spillage.

They have also replaced the tail roller twice due to the pulsation from multiple feeder points. The conveyor
has no self supporting structure. The belt rollers are resting on small pieces of angle mounted to the covers
of the belt-line themselves.  Neither the belt, nor the impact zone could be observed. The top rollers in this
transfer point are at 20° degrees whereas the rest of the belt-line is at 35­°.

The challenge was to eliminate the spillage, support the belt to prevent pulsation, protect the tail roller, and
fabricate a stand-alone structure to allow the belt support needed and make room to change the 20° section
to 35°, thus minimizing the spillage issue. If this is accomplished, access will also need to be provided to
insure proper operation and allow for serviceability of the load zone.

Solution: ASGCO® technicians recommended that our fabrication facility build a structure or a structural unit
so a 24” standard Impact Cradle Bed™ can be installed between the first and last troughing rollers in the load
zoneto support the belt and reduce pulsation.  It was also recommended that they install two (2) 24” x 24”
Safe-Guard™Inspection and Access Doors, one on each side, to allow access and permit easy servicing of the
load zone if needed.  The doors also permit a legal observation point to monitor the transfer.

Results: Spillage was reduced to nearly zero by changing the pitch of the load zone to 35°.  The evident pulsation
was eliminated giving relief to the tail roller and has been in operation for a year now with no current issues or
stress fractures. The access doors allowed the customer to view, access, and service the load zone if necessary,
where as previously, they would have had to disassemble entire portions of the unit to gain access or observe.

The driving force behind this project was initiated out of a safety issue. The existing bucket design would require 3 to 4 operators to manually flip the buckets which would put the operators in a dangerous position as the buckets… 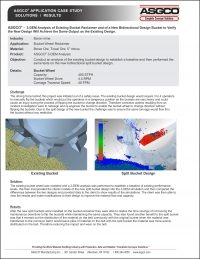 The driving force behind this project was initiated out of a safety issue. The existing bucket design would require 3 to 4 operators to manually flip the buckets which would put the operators in a dangerous position as the buckets are very heavy and could cause an injury during the process of flipping the bucket to change direction. Therefore corrective actions resulting from an incident investigation were to redesign and re-engineer the bucket to enable the bucket wheel to change direction without flipping the buckets. Due to the split design of the new bucket the challenge was to ensure the same tonnage would flow thru the bucket without any restriction. 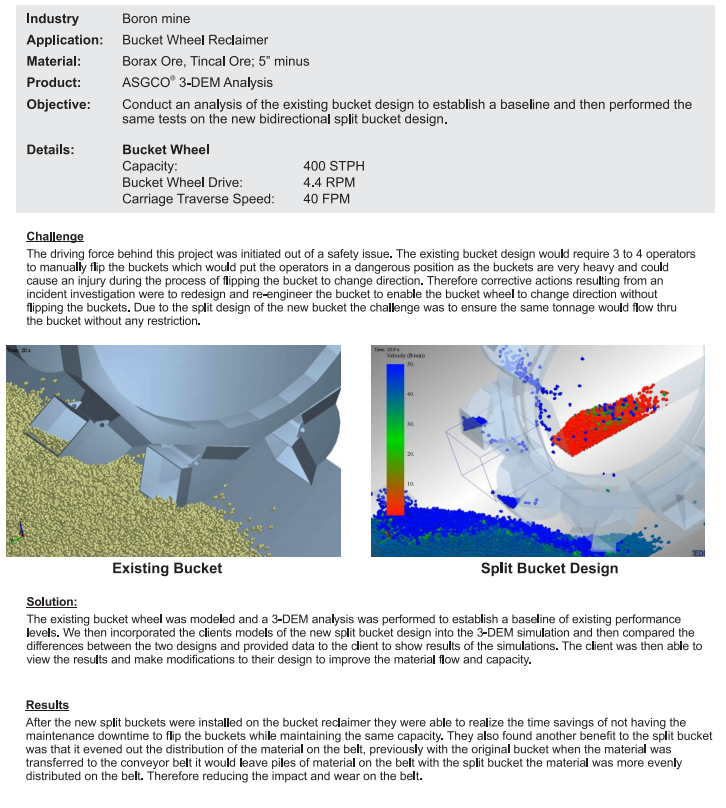